The motion of enzymes

Enzymes form a key part of the machinery of life by catalyzing biochemical processes. Experiments from several groups (A. Sen at Penn State University and C. Bustamante at Berkeley) have found an increased diffusivity and chemotaxis for enzymes performing their catalytic activity.

I develop computational models that include thermal fluctuations, mechanical conformations, hydrodynamics and enzymatic chemical kinetics to understand the microscopic origins of the experimental observations.

Left: the enzyme aldolase, among the ones studied by the group of A. Sen. 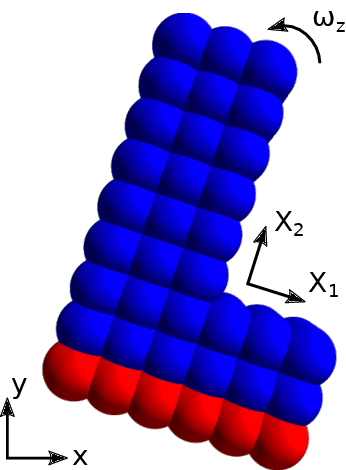 Nanomotors, small devices that convert locally a fuel into directed motion, represent one of the elementary machines at the nanoscale for future chemical and biotechnological applications.

I work on the theory and simulation of nanomotors, relating for instance their shape to the type of trajectories observed in experiments.

Left: A computational model for the L-shape nanomotor.

LRI systems, among which unscreened electrostatic and gravitational systems, possess peculiar thermodynamical and dynamical properties. The Vlasov equation is adequate to study kinetic phenomena in systems with LRI. I perform numerical simulations of the Vlasov equation in one dimension for some LRI systems, allowing for a study independent of the number of particles.

Left: Example of a simulation showing fine scale structure in the short-time dynamics of the Hamiltonian Mean-Field model (see paper "On the effectiveness of mixing in violent relaxation").