In 2015, I worked to implement the so-called "compact" Hilbert index. You can read about it here. After some feedback on the code, I decided that I wanted to investigate "how good" the compact Hilbert actually is. In this post, I compare my code to Chris Hamilton's original code (using a program by Peter Colberg) and verify the basic promise of the compact Hilbert index (keep the ordering of the full Hilbert index).

What is already out there

I am aware of the following softwares for computing the compact Hilbert index:

Are jumps "allowed" in the compact Hilbert curve?

By construction of the orginal Hilbert curve, consecutive points along the curve are at a distance of 1 from each other.

One question that came several times (I can still count on one hand though) is about the existence of jumps in the curve. The only promise in the compact Hilbert index paper is that it preserves the ordering of the Hilbert curve HR08. By graphical observations, some non-cubic curves can be seen as "repeat" of the cubic curve. But this simple situation does not hold for arbitrary shapes.

For "M = [2 2 3]", I show below an example where the dimension of first traversal of the curve is 0. One can see that around the middle of the curve, there is a jump in the z direction that is larger than one. This is reflected in the step size of the lower-right panel. 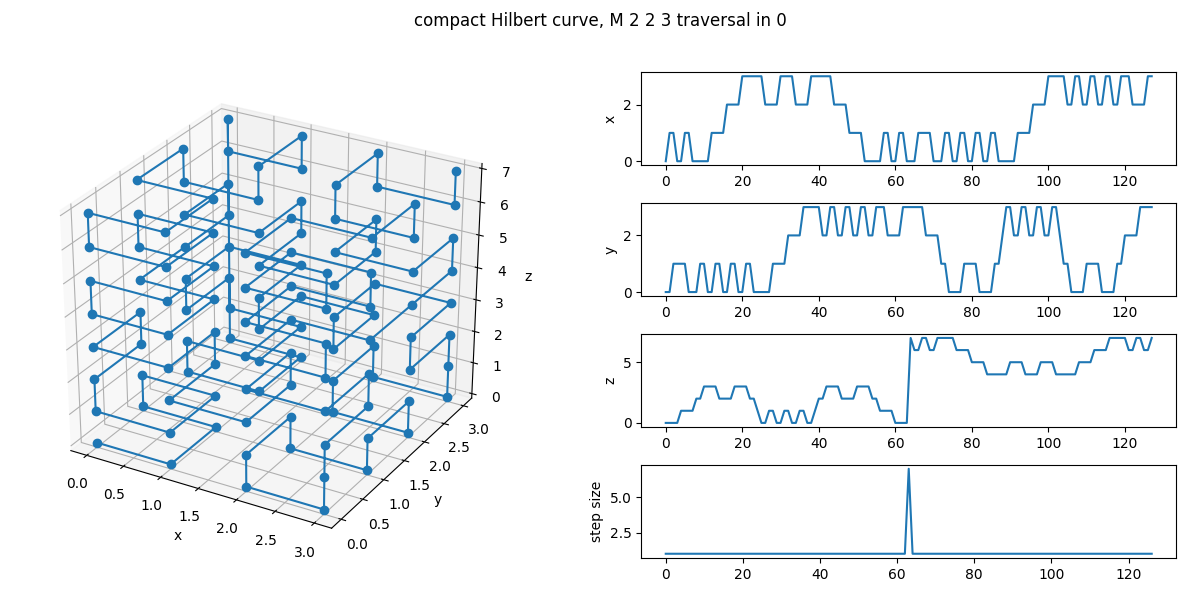 In the next illustration, I have only changed the parameter vd to 1 and now there is no jump anymore. 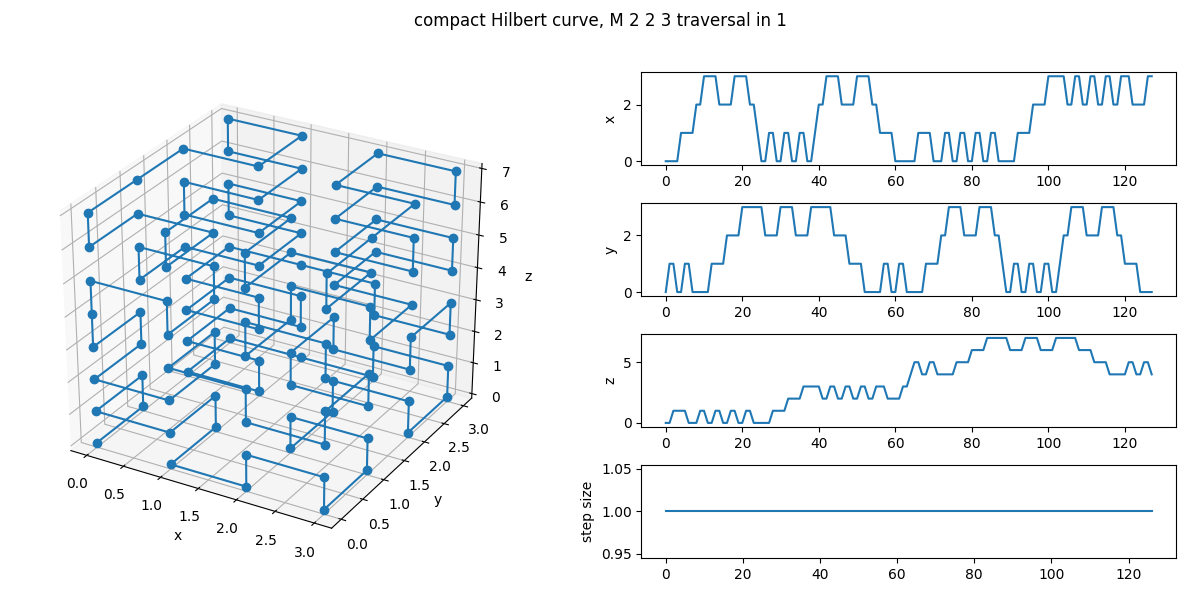 To perform the testing, I compiled the library by Chris Hamilton and used Peter Colberg's hilbert test program that will dump the coordinates of a hilbert curve in a HDF5 file.

Then, I dumped my code for the Hilbert curve in a Python file. The code relies on knowing the spatial dimension (in the code it is N) first and was not super suited to write a proper library. The dimensions of the curve are given as a set of integers ("2 2 3" in the example above) and there is the option --vd to specify the dimension of first traversal.

A plain cubic Hilbert curve is generated and the relative ordering of the compact indices with respect to the original one is performed (with success, ouf) at every run of the program. So this settles the fulfillment of the ordering.

When the option --compare is given, the program will load the data generated by the hilbert program and compare it against the Python data. So far, all combinations of dimensions did work.

The test program is called test_compact_hilbert.py and is available in the repository that I set up specifically for these tests. To display a compact hilbert curve, simply ask, for instance

To perform preset tests with the code, simply issue the command

(The variable HDF5_HOME is only necessary on the first invocation when the program hilbert is built.)

To gain confidence in my code, I have